The Rebbe’s Approach To Individuals With Special Needs

Today marks the 115th birthday of the Lubavitcher Rebbe, Rabbi Menachem Mendel Schneerson of righteous memory (1902-1994).  The Rebbe, the seventh leader in the Chabad-Lubavitch dynasty, is considered to have been the most phenomenal Jewish personality of modern times.

Every year, his birthday is celebrated as Education and Sharing Day U.S.A.. Education Day U.S.A. focuses on the very foundation of meaningful education: instructing our youth in the ways of morality and ethics.

The Rebbe’s Approach To Individuals With Special Needs

Throughout the years of his leadership, the Rebbe would often talk about the value of each individual and the soul that lies within. In the 1970s and 80s the Rebbe on numerous occasions mentioned that individuals with a disability should not be called “retarded” or “handicapped”. Below is a letter the Rebbe wrote on November 17th, 1980 to the participants of the Major Conference for the Jewish Community On Issues and Needs of Jewish Retarded. This letter emphasizes the importance of including individuals with special needs in Jewish Activities for a number of different reasons.

While written for a Jewish audience, the Rebbe’s message can be applied to any inclusive opportunity.

By the Grace of G-d

I was pleased to be informed of the forthcoming Conference. I trust it will mark a turning point in the attitude of community leaders to Jewish education in general and to so-called Special Education in particular.

In any discussion relating to the wellbeing of the Jewish community, the primary, indeed pivotal, issue should surely be Jewish Identity – that which truly unites our Jewish people and gives us the strength to survive and thrive in a most unnatural, alien and all too often hostile environment.

Historically – from the birth of our nation to this day – Jewish identity, in the fullest sense of this term, has been synonymous with traditional Torah-Judaism as our way of life in everyday living. Other factors commonly associated with national identity – such as language, territory, dress, etc. could not have played a decisive role in Jewish survival, since these changed from time to time and from place to place. The only factor that has not changed throughout our long history has been the Torah and mitzvos which are “our life and the length of our days.” The same tefillin, tzitzis, Shabbos and yom tov have been observed by Jews everywhere in all generations. Clearly there is no substitute for the Torah way as the source and essence of our Jewish people.

Recognizing this prima facie fact, means recognizing that Jewish survival depends on the kind of Education that develops and nourished Jewish identity in the fullest measure. And his must surely be the highest priority of al communal services.

With regard to Jewish retarded people – parenthetically, I prefer some such term as “special” people, not simply as a euphemism, but because it would more accurately reflect their situation, especially in view of the fact that in many cases the retardation is limited to the capacity to absorb and assimilate knowledge, while in other areas they may be quite normal or even above average – the Jewish identity factor is even more important, not only per se but also for its therapeutic value. The actual practice of mitzvos in the everyday life provides a tangible way by which these special people of all ages can, despite their handicap, identify with their families and with other fellow Jews in their surroundings and generally keep in touch with reality. Even if mentally they may not fully grasp the meaning of these rituals, subconsciously they are bound to feel at home in such an environment and in many cases could participate in such activities also on the conscious level.

To cite one striking example from actual experience during the Festival of Succos this year. As is well known, Lubavitch activists on this occasion reach out to many Jews with lulov and esorg, bringing them the spirit of the Season of Rejoicing. This year, being a year of Hakhel , I urged my followers to extend this activity as much as possible, to include also Nursing Homes and Senior Citizen Hotels, as well as institutions. I was asked what should be the attitude and approach to persons who are senile or confused, etc. I replied – all the more reason to reach out to them in this tangible way. Well, the reports were profoundly gratifying. Doctors and nurses were astonished to see such a transformation: Persons who had spent countless days in silent immobility, deeply depressed and oblivious to everything around them, the moment they saw a young man walk in with a lulav and esrog in his hand, suddenly displayed a lively interest, eagerly grasped the proffered mitzvah objects, some of them reciting the blessings from memory, without prompting. The joy in their hearts shone through their faces, which had not known a smile all too long.

One need not look for a mystical explanation of this reaction. Understandably, the sight of something so tangible and clearly associated with the joy of Succos evidently touched and unlocked vivid recollections of experiences that had permeated them in earlier years.

If there is much that can be done along these lines for adult and senior Jews in special situations, how much more so in regard to special children, when every additional benefit, however seemingly small, in their formative years will be compounded many times over as they grow older. In their case it is even more important to bear in mind that while they may be handicapped in their mental and intellectual capacity, and indeed because of it, every possible emphasis should be placed on the tangible and audio-visual aspects of Jewish education in terms of the actual practice of mitzvos and religious observances – as I have discussed this and related aspects at greater length in my correspondence with Dr. R. Wilkes of the Cone Island Hospital.

There is surely no need to elaborate on all above to the participants in the Conference, whose Rabbinic, academic and professional qualifications in the field of Jewish Education and social services makes them highly sensitive to the problems at hand. I hope and pray that the basic points herein made will serve as guidelines to focus attention on the cardinal issues and that this Conference will, as mentioned earlier, mark a turning point in attitude and even more importantly in action vis-à-vis Jewish Education, long overdue.

With prayerful wishes for hatzlocho and with esteem and blessing, 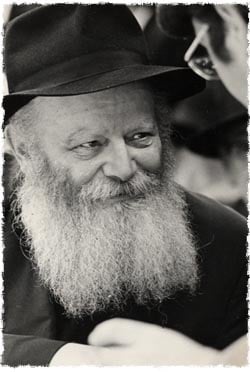 The inspiration for Friendship Circle and its motivation to continuously do more comes from the Lubavitcher Rebbe, Rabbi Menachem Mendel Schneerson of righteous memory.

The Rebbe, the seventh leader in the Chabad-Lubavitch dynasty, is considered to have been the most phenomenal Jewish personality of modern times. To hundreds of thousands of followers and millions of sympathizers and admirers around the world, he was — and still is, despite his passing — “the Rebbe,” undoubtedly, the one individual more than any other singularly responsible for stirring the conscience and spiritual awakening of world Jewry.

The Rebbe’s unconditional love to people knew no bounds. To the Rebbe they all belonged. He made them feel at home. The Rebbe’s warm smile would heal every aching heart.
The Rebbe was always there, offering counsel and blessings, comfort and hope, and often, material help as well.

It is his belief that none of us is complete unless all of us are included. That is the very core and essence of what the Rebbe teaches.

It is this single concept that motivates the Friendship Circle.

3 Financial Assistance Programs for Families of Children with Special Needs